2023 Travelling Tailor Schedule: Coming to all major US cities Feb & March. Get Measured by our Expert Master Tailors! Order Custom made Suits, Custom Tailored Shirts, Blazers, Coats & more. Hand Made in latest styles & fresh luxury cloths of your choice, in colors you love! Customized by our expert craftsmen for the dream fit. See our Tailoring Trunkshow schedule and Make an Appointment with the Tailor for a personal measuring session and consultation.
×

This is an inexpensive ensemble that comprises of two men's bespoke pants with two belts and two ties, and two men's made to measure dress shirts and two men's custom made single breasted suits with a men's tailor made overcoat. All the classic collection garments in this ensemble are made of wools, cottons, silks, and many other fabrics. The men's bespoke shirts that we are offering can have multiple patterns and features like, edward stripes, contemporary stripes, continental stripes, tone on tone herringbone pattern, subtle stripes, street stripes, wide stripes, ainsley collars, folded barrel cuffs, buttoned barrel cuffs, epaulettes, and many other options. The men’s custom made coat can have patterns and features like, snake skin pattern, designer cobra skin pattern, houndstooth tweed pattern, wide stripes, contrast striking stripes, wide collars, pressed peak collars, double breasted, single breasted, long and slim, knee length, and many other options. The men's made to measure suits comprises of men's custom pants with features and patterns like slim fit, comfortable fit, vertical pockets, hand sewn hems and edges, elastic waistband with extended belt loops, inch stripes, subtle chalk stripes, pinstripes, tonal stripes, invisible stripes, Italian stripes, and many other options, and men's bespoke single breasted jackets with patterns and features like, beaded and pearl stripes, wide stripes, two tone corded stripes, bankers stripes, long sleeves with buttoned barrel cuffs and slim fit, sleeves cuffs with boutonniere, hand pressed lapels, padded shoulders, and many other options. Subscribe to Tailoring News to get regular updates on all the latest deals that we offer. 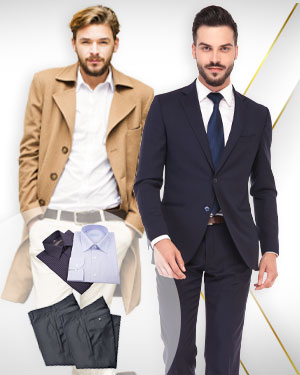 Select fabric, style and colour using the buttons below each item listed and use the special request
button to indicate any changes or special requests to your custom piece selected.
Other Deals & Offers
If you have already added profiles to your account which are not showing,
please type in any email address associated with that account and click on Try Again.

Thanks . Check your inbox for your log in information. If you don't hear from us in the next few minutes, remember to check your spam, in case our message to you goes into spam instead. Also remember to mark mycustomtailor.com as a safe sender to ensure our communication reaches you in a timely manner.
COPYRIGHT © 2023-2025 MYCUSTOMTAILOR.COM