[Register for Road Show 2022]: USA, Canada, UK, Continental Europe, Australia, New Zealand 2022 Get Measured by the experts!. Order Custom Suits and Tailor made Bespoke Dress Shirts in person with our Traveling Tailors. Make an appointment for a Free consultation session with our Master Tailors!

The words coat and cloak both come from Medieval Latin clocca which developed into the Old North French cloque, and then Middle English cloke, all meaning "bell" (from the shape of a cloak or cape). Capes were the outerwear of choice until the end of the 18th century.

The Roman toga was as much as 6 by 16 feet. Senators needed help to properly drape the garment.

The common people went for outerwear based on the chasuble, an early Christian vestment, a long sleeveless vestment worn by priests celebrating Mass and in the form of a poncho. The word is from the Late Latin "casubla", meaning hooded garment from "casupula" which is diminutieve of casa meaning house. They must have been very large

The Mantle , a long, loose cape like cloak original cut square, oblong or as part of a circle was worn from the 12th through the 16th century. It was fastened by a pin or clasp on one shoulder or tied at the neck.

Ancient Britons made do with one piece of cloth, which doubled as a mantle by day and a blanket at night. The fabric pattern was usually tartan or plaid.

By the 14th cent it had developed into a ceremonial cape. When lined it was called a double mantle, and by 19th cent a mantle meant a cape without sleeves. The name is from Latin "mantellum" meaning "cloak".

Most civilizations prior to the 14th century were outfitted in long flowing mantles. In Europe plate armor was replacing chain mail. Since plate armor is closely fitted with sharp points the "pourpoint" develops as a sleek, tight jacket, padded to protect the body. (It also gives definition to a guy's chest!) Then came the shorter "journade" and "courtepy" with a pinched waist and padded shoulders (called "mahoitres"). This clothing evolution lead to the doublet in the 14th century.

Cloaks with sleeves appeared in the 16th century.

The Doublet was the chief upper garment worn by men from the late 14th century until 1670. It was a close-fitting, waisted, padded jacket worn over a shirt. Its ancestor, the gipon, , was a tunic worn under armor, and at first came down almost to the knees. The civilian doublet originally had skirts but gradually lost them. It had no collar until 1540, allowing the shirt to be seen at the neck; the shirt was also visible through slashes or "pinking" in the material. The word "pinking" means "to decorate with a perforated pattern". or "to cut with pinking shears" from the Latin "pungere" and the Old and Middle English words "pingen, pinken" and "pyngan".

The sleeves, which at first were plain and close-fitting, became wide, padded, and slashed with complex designs. Detachable sleeves were worn after 1540. The doublet fastened down the front with buttons, hooks, or laces in the 16th century, though earlier it was hooked out of sight at the side.

The height and narrowness of the waist varied from country to country, as did the materials, which included rich fabrics such as velvet, satin, and cloth of gold. An extreme fashion, the peascod, or goose-bellied doublet, came to England from Holland in the 1570s; it was padded to a point at the waist and swelled out over the girdle. It survives in the traditional costume of Punch.

When the French Revolution 1789 made it politically incorrect to be seen in rich folks attire, the doublet shortened to a jacket like coat.

Jerkin - A close-fitting, hip-length, collarless and having no sleeves but often extended shoulders, belted, usually made of leather and worn over a doublet by men in the 16th century.

A gown or cloak might be worn over the doublet by the elderly or in cold weather. In the 16th century it could be worn partly open, requiring a stomacher or placard underneath. But in England in Elizabethan times a man was fully suited in doublet and hose. Points, ties threaded through opposing eyelets in each garment, joined the two parts of the suiting.

On February 3, 1661 Samuel Pepys stepped out for the first time in his "coate" which was "... the manner now among gentlemen". Pepys' coate was a knee length adaptation of a loose riding garment that in this new form replaced the padded doublet, which came from the tunic.

The Justaucorps a slender, knee-length coat with short sleeves to show the elaborate cuffs of shirts, became popular in the mid 1600's. By the end of the 17th century it acquires a nipped-in waist, full-length sleeves and massive cuffs and becomes everyday men swear. The Justaucorps developed into a close-fitting knee-length coat, which made the body appear smooth and round, thus determining the stylish silhouette of gentlemen in the 18th century. The slightly rounded front hem showed parts of the vest and the breeches. The sword was worn under the flared skirts.

Great coats, such as the surtout, were popular during the early 19th century. It had a pinched waist, full bottom, puffed chest, velvet lapels in black, blue or olive. The Paletot, an abbreviated great coat, replaced the surtout. In the 1830's it was a short overcoat without a swaisline seam with or without a short back vent and sometimes pleated at the side seams. The word is from the Dutch "paltrok" ("pals" meaning "palace" and "rok" meaning "garment").

Overcoats were part of military uniforms since the late 18th century, including the Napoleonic era, it was more common for military officers than soldiers. Overcoats were more popular for troops in military fashion during World War One. Most military overcoats were double breasted. 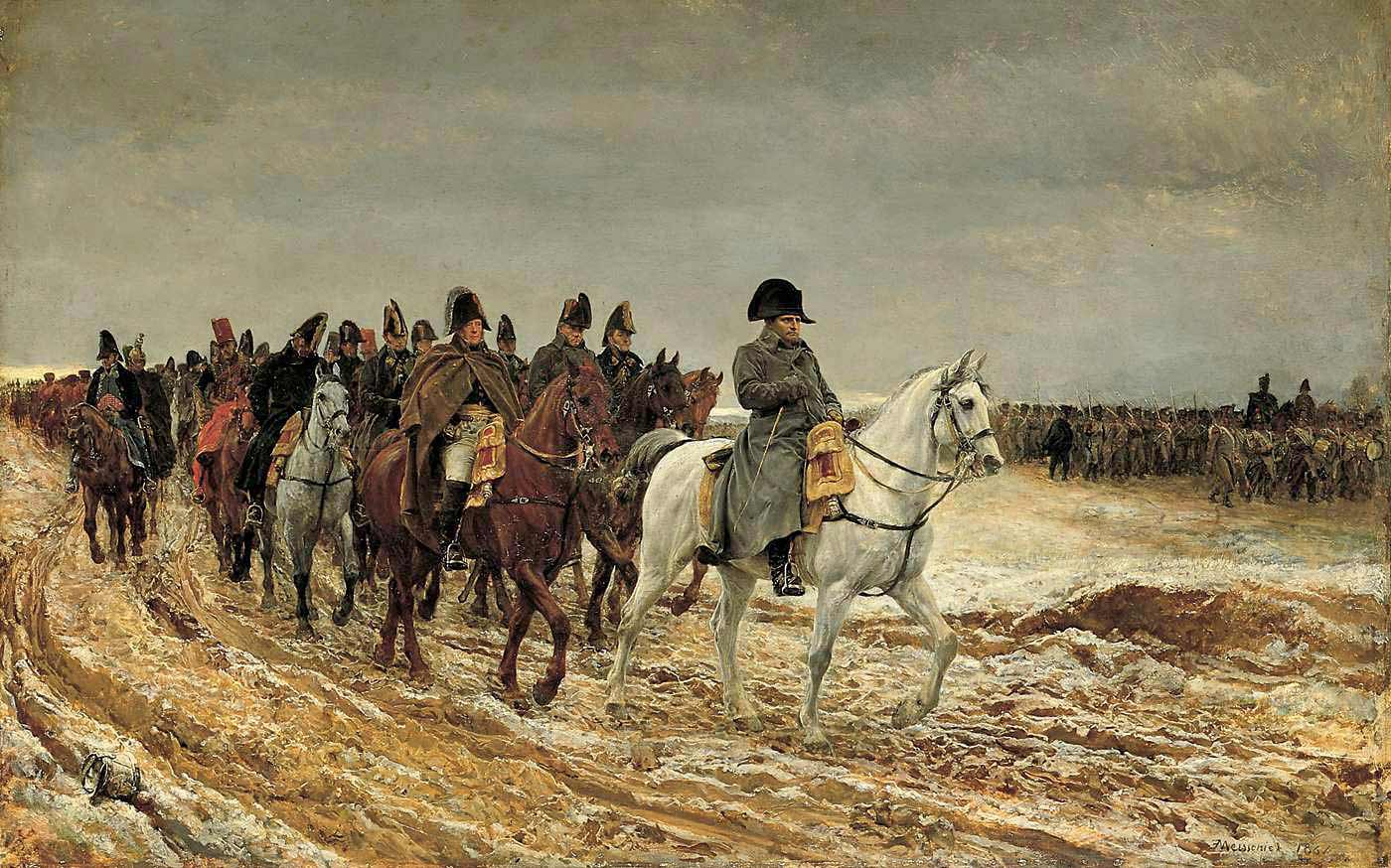 Napoleon, mounted, wearing a grey overcoat in the painting, Napoleon in the campaign of France 1814, by Jean-Louis-Ernest Meissonier, from the book "A History of the Nineteenth Century, Year by Year," by Edwin Emerson, Jr., 1900. This picture is often called, wrongly, the retreat from Moscow.

The overcoat became more popular for civilian wear during the reign of English Queen Victoria (1837-1901) and started looking more like current styles. Modern suits and outerwear developed in the 19th century from these early garments.