The first shirt, after the animal skin, was worn as early as the 18th dynasty of ancient Egypt. They were made of a rectangular piece of linen, folded and sewn up the sides, with openings left for the arms and a hole cut at the fold for the head. There are also shirts preserved from ancient Egypt that have long, tight sleeves sewn into the armholes.

Shirts began to be embroidered, laced, and frilled in the 16th century, and men's outer garments-the doublet, a precursor to the jacket-had a low neckline so that the shirt showed across the chest. By the end of that century, the shirt frill had developed into the ruff, which was a mark of the aristocracy. 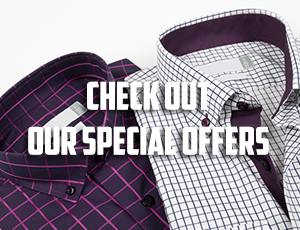 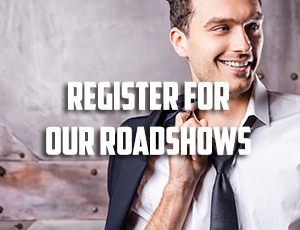 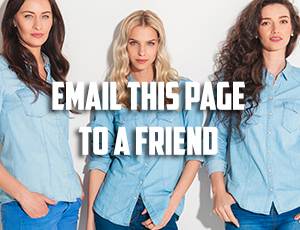 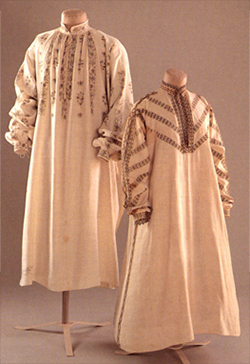 The woman's shift is a little later, dating from the reign of James I, in about 1610.

Both are made of linen decorated with delicate embroidery in black thread. The needlework on the man's shirt includes naturalistic motifs of birds, insects and flowers - while that on the woman's shift has a geometrical pattern.

A law was passed in England that forbade persons without social rank to wear elaborately decorated shirts. At the beginning of the 17th century, the doublet had become so short that the ruffled shirt was visible between it and the breeches. A new style of men's dress was initiated in 1666, when Charles II of England adopted the long waistcoat, which covered up most of the shirt.

"Ruff and ready". The collar was derived from the "ruff", a detachable pleated collar of linen, supported by a wire frame. It's that frilly circular neck covering from the late 16th and 17th centuries. Think of Shakespeare or Queen Elizabeth I, and you'll remember what I'm talking about.

The roots of the ruff were in East where Indians wore collars stiffened with rice water. In 1540 the Queen of Navarre (in the Pyrenees of northern Spain and southwest France, an independent kingdom until it was incorporated into the French crown lands in 1589) began to widen the frill to hide her ugly throat. Catherine de Medici of Italy adopted it and the style spread to England after Mary Tudor married Phillip II of Spain.

The popularity of the "ruff" spread to gentlemen's shirt cuffs which were decorated with bands of lace until around 1690 when the frills disappeared leaving just the long sleeve.

The 1800's saw the last burst of glamour in men's shirts until the 1960's with chin high collars and rows of pleated ruffles on the chest. In 1840 there is some relief as collars turn down their stiff points to form wings, but shirt bodies sport stripes and floral patterns and studs are more popular than buttons.

As the 18th century unfolded, so did the cravat, becoming longer and lacier at the ends. France's Republican "incroyables" ("unbelievables") were known for their 15-foot cravats wrapped around the neck and tied in a bow. They were worn so high a man could not move his head. But they did show their colors, usually red, and allegiance to the French Revolution.

The first half of the 19th century in England was the golden age of cravat. The neck cloth was so elaborate and voluminous that George Bryan "Beau" Brummell (1778-1840) and his valet sometimes spent a whole morning getting it to sit properly.

Classes were given on how to tie the Ascot, and other knots as decreed by dandy, "Beau" Brummell.

Brummell was born in London, and educated at Eton College and Oriel College, University of Oxford. At the age of 17, Brummell became an intimate companion of the Prince of Wales, later George IV, (1762-1830), king of Great Britain and Ireland (1820-30), and was for many years regarded by court society as a wit and an authority on all matters of dress and etiquette. 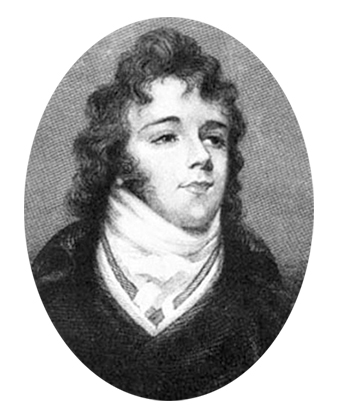 While his fortune lasted, Brummell kept an elegant establishment in London, but he finally lost his royal friends, gambled recklessly, and in 1816 fled from his creditors to France. He obtained an appointment as British consul at Caen from 1830 to 1832, but eventually was forced into debtor's prison and died in Caen in a mental institution.

Brummell popularized a new English style of menswear in the early 1800s. He wore suits made of dark wool rather than of silk, and he promoted the idea that simplicity in dress could be elegant. He also stressed the importance of personal cleanliness as a fashionable virtue, insisting that a plain but clean white shirt was preferable to a fancy one that was dirty. Brummell set the mode in 1806 for the ruffled shirt for both day and eveningwear. Brummell was also responsible for introducing the fashion of wearing only black and white for eveningwear.

Men's clothing became more somber in the Victorian age especially during the morning of the death of Prince Albert, Queen Victoria's husband. High neck cloths were abandoned for collars and ties more or less the same as those worn in the 20th century.

Shirts then were tunic style, which pulled directly over the head. In 1871 the first "coat style" shirt was registered in England. It opened with buttons all the way down the front and was not pulled over the head. The first modern shirt collars appeared in the late 1800's and were high, starched, and white collars that attached to the "new style" shirts. The wing collar is a direct descendant of these stand-up collars.

Housewife, Mrs. Hannah Lord Montague (1794 -1878), of 139 Third Street, Troy, New York "invented" the detachable collar in 1827. She got tired of washing her husbands entire shirt when only the collar was dirty.

Her husband, Orlando Montague, showed-off his wife's invention to the guys around town, and soon all the wives of Troy saw the time saving value of this new invention. Soon after, merchants got interested in marketing the collar, and begin manufactured collars in mass quantities for sale to the outside world.

Troy, New York, became "Collar City" to the rest of America, and went from a sleepy little upstate town to the center of American shirt and collar manufacturing. Woodsheds, garrets and store fronts became collar making places as teachers, farmers, carpenters, butchers and ironmongers were drawn to this new trade by its apparent simplicity: a table, a pair of scissors, a bolt of cloth and a spool of cotton was all that was necessary.

By 1897, twenty-five manufacturers in Troy were producing a total of eight million dozen collars and cuffs a year. Linen collars were offered in a breathtaking variety of styles and had become the status symbol of the growing office-worker class (i.e. "white collar" workers). Mail order catalogs like Sears-Roebuck, Montgomery-Ward, and Bloomingdale's sent detachable collars to every part of America, along with the often-colorful collarless shirts with which they were worn. By the Turn-of-the-Century, nearly every man in America had his neck in the vise-like grip of an iron-hard starched linen detachable collar.

If you were rich your collars were in cotton or linen and heavily starched, hence the name "stiff collar". Collars were stored in a round leather collar box, usually with a little lidded box inside for studs. The detachable collar had to be attached with a collar stud in the front and back. Those stiff collars had to go to commercial laundries, which was quite expensive. Poorer people wore collars made from lacquered cardboard, which were discarded once they were dirty.

Beginning in the 1920's collars were even made in that new material Bakelite, (just wipe clean). Of course really poor people never wore collars; even with their Sunday best they wore collarless shirts. The term white and blue-collar workers would have been more accurate as collar and no collar workers.

Also in the 1920s collars (still separate) were available in the same fabric as the shirt, not just white! Shirts could be purchased with two additional collars. Collars in matching fabric were never as heavily starched as white ones.

Disposable collars reached the height of popularity in the 1860's, but by 1928 the detached collar was gone, replaced by the semi-stiff attached collar.

Polo players originally fastened their shirt collars down to keep it from flapping in their faces. There is no historical evidence (but some great folklore which may or may not be true) that the polo players used buttons. It seems more authentic that pins of some sort were used.

In any case, as the story goes,John Brooks, grandson of Brooks Brothers' founder Henry Sands Brooks was watching a polo match in England and noticed the button-down collars that the players wore (or pinned!). He decided to adapt the button-down collar for shirts. Now a business classic, it was introduced to the USA by Brooks Brothers in 1896. This was a bold move since most men's shirt collars were stiff and detachable.

On April 7, 1818 Henry Sands Brooks ,age 45, opened H. & D. H. Brooks & Co. on the Northeast corner of Catharine and Cherry Streets in New York City. After his death in 1833, control of the company was assumed by his eldest son, Henry, Jr.

In 1850, Henry's sons Daniel, John, and Elisha inherited the family business, and Brooks Brothers was born.

Button-down collars were popular in the late Forties after WWII and synonymous with the Ivy League Look of the 1950's.

Legal trivia - Brooks owns the name "Polo collar" for its button-down, which is why Ralph Lauren can't use the name Polo on his button-down collar shirts.

Soft attached collars were made popular by the English Duke of Windsor (later briefly King Edward VIII) who preferred the attached softer collar and the stiff collar became obsolete. Also collars and cuffs that matched the shirt fabric became fashionable.

Pinned or eyelet collars were popular during the late 1920's and early 1930's, the pin pierced the fabric under the tie pulling the wings of the collar together raising the tie. Collar bars came later which slipped or slid on the edges of the collar. The tab collar in the late l920's, which used tabs to fasten under the tie, followed this style. (It was popular again in the 30's 60's and 90's).

Next were straight collars. The collar points were lengthened or shortened to create fashion changes.

English Spread, Cutaway, or Windsor collar was said to accommodate the Duke of Windsor's (later briefly King Edward VIII) thick tie knot (also know as the full Windsor knot). This collar has a wider spread than the semi-cutaway or spread collar.

The club or Eaton, a rounded collar was popular in the 1930's.

In the 1960's technology caught up with the fabric industry with a wealth of permanently pressed synthetics.

The shirt was a major focus of the Peacock Revolution in the 1960's with shirts appearing in a variety of stripes, patterns, and flamboyant colors previously not worn, close-to-the-body shapes, and collars wide enough to accommodate the widest ties ever.

In the early 1970's knit dress shirts came on the market.

Keep your shirt on:

To remain calm or patient: The plane doesn't land for another hour, so keep your shirt on.

To lose everything one has or owns.

The Shirt off (one's) back:

The maximum one is able to give or lose:

The only thing those swindlers didn't take was the shirt off my back.

Thanks . Check your inbox for your log in information. If you don't hear from us in the next few minutes, remember to check your spam, in case our message to you goes into spam instead. Also remember to mark mycustomtailor.com as a safe sender to ensure our communication reaches you in a timely manner.
COPYRIGHT © 2021-2023 MYCUSTOMTAILOR.COM