Did you know: Our Tailors are visiting your city this month! Get Measured by our Expert Master Tailors! Order Custom made Suits, Custom Tailored Shirts, Blazers, Coats and more. Custom Service for men & women. See the latest styles and fresh luxury cloths. Great fit and Top Quality - Hand Made in fabrics of your choice, in colors you love! Customized by our expert craftsmen for the dream fit. See our Tailoring Trunkshow schedule and Make an Appointment with the Tailor for a free measuring session.
×

Unlike sack coats, the frock had a waist seam, where it was fitted, and was frequently padded in the chest. It had five vertical seams versus the sack, which usually had three. The frock came in many different cuts including the cutaway, tails, or the Prince Albert. The latter, a knee-length coat with a full skirt, was especially popular with professional men. 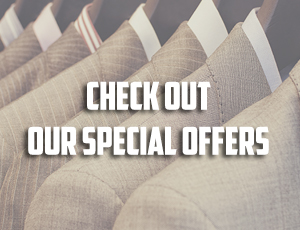 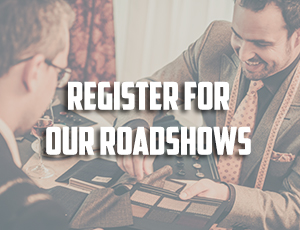 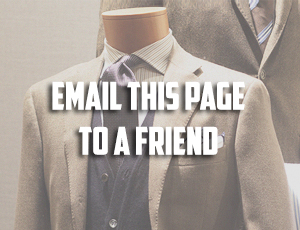 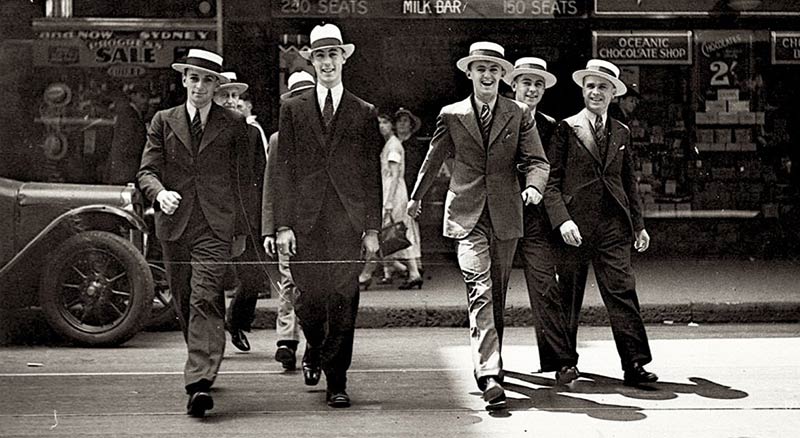 By the late nineteenth century distinctive characteristics of the sack coat included a small collar, short lapels, a fastened top button close to the neck, moderately-rounded front hems, flap or welt pockets on the hips, a welt pocket on the chest, and a slightly baggy appearance.

At first men viewed the sack suit as an informal alternative to the frock suit that could be worn for sports or leisure activities at the seaside or in the country. By the 1860s they began wearing it for daywear.

As Harper's Bazaar wrote in their April 6, 1878 issue, "Until visiting hours gentlemen of greatest elegance wear [sack suits], which do not differ essentially from those worn by travellers and the habitues of the races." Later in the year the magazine noted that men were choosing the sack suit "for business, for travelling, and morning wear on the street."

Besides the loose-fitting coat, another informal feature of the sack suit was that all three pieces were made from the same fabric. Fashion magazines listed plaids, small checks, or narrow stripes in dark color combinations, especially browns, as the preferred fabrics for sack suits.

In 1875 Tailor and Cutter wrote that "the leading characteristic is narrow stripes and small checks," though soft wool Angolas "show a little more boldness of both color and pattern, the general tone in the latter respect being quiet combinations of black, grey, and brown." However not all men wanted "quiet combinations," as evidenced when the West End Gazette of Fashion complained in 1876 that "Our fast young men will find something to be noisy in, in the shape of loud plaids, the patterns more striking than tasteful."

By the turn of the century, sack coats had become the dominant mode of dress for men, with frock coats regulated to formal occasions. The introduction of the tuxedo, a formal sack coat, eventually made frock suits obsolete.

It was introduced to America slightly re-designed by Brooks Brothers in 1895.

World War I put men in uniform and restricted the excess use of cloth for civilian use. 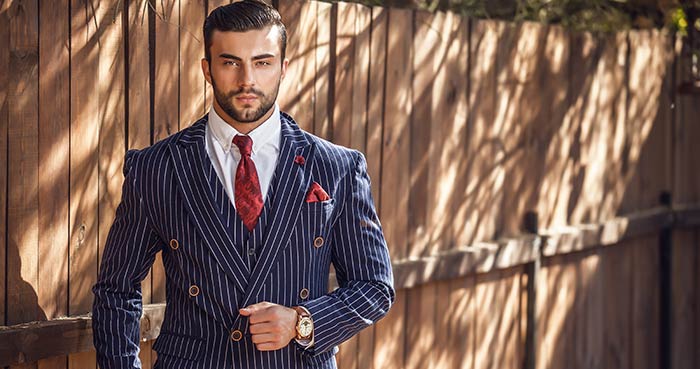 The 1920's and the jazz age expressed the exuberance after the war with baggy pants (Oxford bags 1925) and unabashed style. Tweed and Flannel became popular suit fabrics. This all ended October 24, 1929 with the great Wall Street Crash.

During the 1930's those that still had money showed it by wearing double-breasted suits. The Duke of Kent method of buttoning only the bottom button on his double-breasted suit creating a longer diagonal line across his chest giving the wearer a thinner, more dynamic look.

"Prince of Wales" checks or Glen plaid as worn by the King Edward VIII caught on.

Other 1930's influences were the flamboyant look of American Gangsters who wore bolder plaids, wider stripes, brighter colors, and wider trouser bottoms. And the Blazer became accepted for casual wear at sporting events

World War II brought drastic and quick changes to men's fashion. On March 8, 1942 the US Government War Production Board issued regulation L-85. Excessive cloth became the first casualty of war as pleats, patches, cuffs, vests, a second pair of pants with suits, all disappeared along with the double-breasted suit. Natural fibers were also restricted which forced the production of artificial fibers such as viscose and rayon. Fashion designers created styles that would last several seasons.

The politically incorrect and snub to wartime rationing was the Zoot Suit, born in the nightclubs of Harlem in 1935, the style was embraced during the war by East Coast urban blacks, West Coast Hispanics, and in France by the "Zazous" under German occupation. The Zoot suit was an exaggerated look, which included an oversized, usually double-breasted jacket with large padded shoulders, wide lapels worn with baggy high-waisted trousers that narrowed dramatically at the ankle, hand-painted ties, a wide-brimmed hat and extremely long watch chain. Malcolm X was fifteen years old when he bought his first Zoot suit in 1940

There was a return to excess just after WWII, with a trend to full-cut clothing as an indication of luxury. The khaki pants came home with the veterans and took their place in civilian life. In 1948 Esquire Magazine promoted the new "Bold Look" which featured loose fitting, three button, single-breasted jackets with center vents and notched lapels. Peaked lapels were reserved for double-breasted styles from then on.

The overindulgence of the late 1940s was replaced by a cautious, conservative attitude in the early 1950's. The Ivy League look, first used to describe fashions in the mid 1920's, was "in" with narrow shoulders and lapels.

In 1956, the "Continental Look" from Italy featuring a shorter, shaped jacket was thrust upon us.

The "Peacock Revolution" in 1965 announced the new youth culture. Carnaby Street, London provided colorful mod clothes, which swept both England and American. The word Mod actually referred to the enthusiasm for modern jazz. Although the mod look would have an enduring influence on men's clothing the fad had faded by 1967 to be followed by the Nehru lapel less jacket, and multiple-buttoned Edwardian suit.

The late 60's saw innovations in the form of unconstructed or soft suits, vest suits, tunic suits and the shirt suit and the rise of name designers of menswear.

The Leisure Suit is (was?) a man's two-piece casual ensemble consisting of a shirt style jacket and matching pants fabric popular in the early 1970's, and usually made of synthetic double-knit. Designer Jerry Rosengarten, who is now a real estate developer in New York City, invented the suit in 1970.

The very first polyester double-knit leisure suit was a reversible navy-blue/hound's-tooth, which Rosengarten created to highlight the versatility of double-knits.

The polyester outfit became known as "the sleaze-ure suit" after companies started making cheap knockoffs in bizarre colors including powder blue and mint green. Rosengarten says if the major textile mills had jumped on the polyester bandwagon sooner, leisure suits would still be in style today.

The influence of 1970's Disco brought us white polyester vested suits and poly shirts without a tie, unbuttoned to show off the gold chains.